West Vancouver is a pleasant waterfront community with a population of 45,000. Here, Cypress Mountain was the 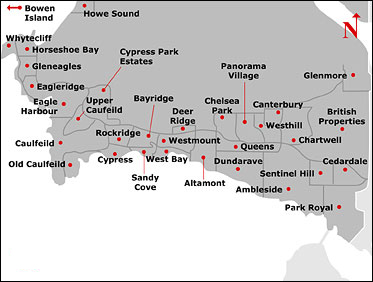 venue for the freestyle skiing and snowboarding events at the 2010 Olympic Winter Games.

Indoor/outdoor mall Park Royal offers almost everything else with its more than 250 stores. In West Vancouver, you have much to explore in addition to Cypress Mountain. You’ll find Lighthouse Park, hiking and walking trails and plenty of golf. Beyond town, a short drive up Highway 99 North takes you to Whistler, providing some of the world’s best skiing and snowboarding. Nearby, Horseshoe Bay is a gateway by ferry to Vancouver Island and closer getaway options, including Bowen Island and the Sunshine Coast.

From 27th Street West to 31st street is the East to West borders of Altamont. Then, from the Trans Canada highway in the North, heading down South to Marine Drive makes up the area boundaries for this community. One of the top residential locations in West Vancouver, this community is blessed with spanning scenic views, outstanding natural beauty, and a low crime rate.

With its many trendy stores and shops, this area can definitely meet the daily needs of the local residents here in the community. Offering a beautiful view along the waterfront, many local parks, as well as the close location to most major facilities and businesses. Many community events are held in Ambleside such as the Canada Day celebrations, Harmony Arts Festival and many more. This community grows a bit more every day, and is always increasing its importance to the city of West Vancouver.

Named after an old Pacific Great Eastern Railway Company station, Ambleside, in the beginning was a swamp and landfill that was used by the local loggers in the area. In 1918, the ferry system in Horseshoe Bay brought popularity to the area and the Ambleside Park was later officially designated as a park. The park has and always will be a large part of Ambleside.

The British Properties is made up of the areas Glenmore, British Properties, Chartwell, Canterbury, Westhill, Whitby Estates, Chelsea Park, Taylor’s Lookout, Rogers Creek, Cypress Park, and Panorama Village.  The area is comprised of gorgeous multi-million dollar homes, stunning landscapes and breathtaking views. It is located above the highway and stretches for more than 3 exits.  Also located in the British Properties is the well known Hollyburn Country Club offering amenities such as tennis, squash, badminton, fitness, hockey, aquatics, restaurants and more.

Caulfield is known as one of Canada’s most beautiful and prestigious neighbourhoods. It is situated on West Vancouver’s peninsula, which is also known as Lighthouse Park. Its North to South border is from Trans Canada Highway, South to Marine Drive, and from East to West, it stretches from Kieth Road west to Eagleridge Drive.

Located in the western region of West Vancouver at exit 4, Caulfeild Village is the ideal “one-stop shopping” destination. Some of West Vancouver’s newest and oldest homes are here in an area that is largely tucked away from public view. A quick pass on the Upper Levels Highway will reveal a neighbourhood hub of families who congregate at the Caulfeild Village Shopping Centre for their household needs and deeds. Caulfeild’s ample parking and proximity to the bus route makes it a convenient and popular stop for locals or a quick detour from Highway 1.

Venture down the mountain towards the water’s edge and you’ll find Olde Caulfeild and other pockets of water side wonders that include tiny streets and massive homes nestled into the banks and along the waterfront. If you’re on Marine Drive, you’ll find yourself right beside Lighthouse Park – one of Vancouver’s famously photographed locations and natural wonders.

Caulfield offers amazing views of the ocean, mountains, Strait of Georgia, Burrard Inlet, Howe Sound and the City of Vancouver. Not only can the residents enjoy the beautiful views, but they can also watch the cruise ships sail underneath the Lions Gate Bridge, or look at the view of Stanley Park and the West End of Vancouver. Located just minutes from downtown Vancouver, Grouse Mountain, Capilano Suspension Bridge, Horseshoe Bay the ferries, and much more, make Caulfield a beautiful central community to live in.

Named after an English Gentleman by the name of Francis William Caulfield, who loved the woods, beaches and the beautiful flowers in this area. In 1899, he purchased the land that is now the centre of Caulfield, and created his idea of the perfect village. Because he did not like the right angular roads and streets that were so common in North America, he made the roads curve like the English style.

This 3000 hectare park is bordered on one side by the Howe Sound to the west, the ridgetops of Mount Strachan and Hollyburn Mountain to the north and east and by West Vancouver to the south. The lookouts of the park provide an excellent to view sights such as the metropolis of Vancouver, Mount Baker and the Gulf Islands and Vancouver Island.
The forest cover of coastal Douglas fir and western hemlock is inhabited by deer, bears, coyotes, and birdlife including ravens, woodpeckers, hawks and owls. Cypress Ski Resort and its surrounding lakes and scenic attractions draw many, many visitors to the park each day.

Neighbouring Ambleside on the West side, Dundarave is a small but fascinating community. Its boundaries are 21st Street, West to 27th Street, and From the Trans Canada Highway, South to Marine Drive. Home to exciting shops, cafes, restaurants, and services.

Dundarave, one of West Vancouver's most sought after and prestigious communities offering waterfront mansions, village like condominiums, estate size lots and even soaring view lots all in one. While not the most expensive area, Dundarave has so much to offer and each year more and more high end homes come on the market.

With the districts population aging and prices soaring, most home owners are moving to village communities with parks and cafés nearby. Dundarave spans 13 city blocks and has price ranges from around 1 million to about twenty million dollars for a grand waterfront chalet.

There are still many lots available along the waterfront with only old homes on them - these are potential mega homes to be built in the future.

Horseshoe Bay is a West Vancouver community of about 1,000 permanent residents. Situated right on the western tip of West Vancouver, at the entrance to Howe Sound, the village marks the western end of Highway 1 on the British Columbia mainland.

This bustling village is home to the ferry terminal that connects the mainland to Vancouver Island, the Sunshine Coast and Bowen Island. Visit Horseshoe Bay village for a wide variety of dining options, for unique gift shops, and for exciting boating adventures.

Whether on route to Whistler and beyond or boarding a ferry, this village is also a worthwhile destination to view spectacular Howe Sound from a waterfront park.

Horseshoe Bay's waterfront fixtures include a ferry terminal with berths for three large ships of the BC Ferries fleet, a marina, shops, restaurants, pubs, and a restful park and playground at the water's edge. Recreation in the vicinity is more than abundant: boating, kayaking, scuba diving, whale watching, golf and skiing.

Visit the BC Ferries web cam by clicking here.
Find out more about Horseshoe Bay by visiting www.horseshoebaybc.ca

Incorporated on January 2, 1971, the Village of Lions Bay is one of the smallest municipalities in British Columbia.

Governed by a mayor and four councillors, municipal operations are conducted by seven full-time and two part-time staff members. The municipality has an annual budget of roughly $800,000 and has a residential millrate of 1.8360 per thousand dollars of assessed property value, with the average property assessment being roughly $473,000.

Lions Bay is located in the northwest corner of the Greater Vancouver Regional District, bordering on beautiful Howe Sound, about 11 kilometers north of Horseshoe Bay with the Sea to Sky Highway running through the Village.  The area of Lions Bay is approximately 560 hectares with 10 km of paved roads.